Latvia may be a small, northern European country. It may be flat and cold; its people may be quiet tempered – but they still know how to have a good time. Latvians are throwing a five-year-long party to celebrate their independence. Now that’s a spirit I can get behind.

The Latvian capital of Riga is pretty, peaceful, and super easy to navigate. Busses and trams are frequent and affordable, but you can walk almost anywhere. Estonian startup Bolt is another great way to get around – think Uber but cheaper. Or, rent a bike.

Riga is famous for art nouveau and wooden architecture, as well as the medieval old town, which is a UNESCO world heritage site. The whole damn thing! It’s also alive with music, art, and innovation.

There are lots of things to see and do in Riga, especially if you get lucky with the weather. Here are some cool places in Riga:

This welcoming bar has it all – food, wine, cocktails, craft beer, coffee, and games. It’s always full of young people hanging out and enjoying some conversation. I went to the one on the very centrally-located Terbatas iela, but they have several locations around town. Based on my powers of deduction, I’m pretty sure the name means “hedgehog” – any Latvian speakers out there want to challenge me?

Traveler’s note: It seems Latvians are really into two things: coffee and beer. I imagine either is nice on a cold Latvian day. So, you’ll find an endless supply of cute and hip cafes where you can rest your feet, warm up, or get some work done. 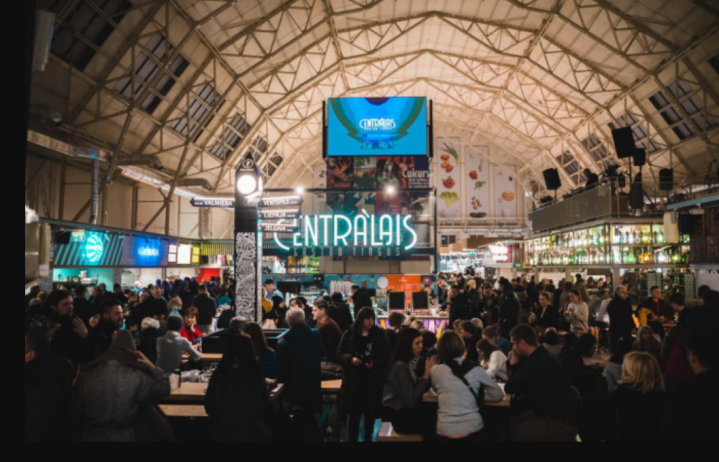 Riga Central Market is Europe’s largest market and bazaar, with over 100 years of history. Produce and meat stalls mingle with artisan goods like woolen socks and Baltic amber.

While the old-school market is still a centerpiece, recent upgrades have turned part of the indoor area into a modern gastronomic food pavilion. You’ll find everything at Centrālais from burgers, pho, oysters and prosecco, tempura, sushi, waffles, and more. Grab a beer and enjoy this physical embodiment of a land in constant transition. Located near the bus and train stations, just a short walk from the center.

When I read that this was one of the most legendary cafes in Riga, I knew I had to go. Owing to history, Riga doesn’t have any pre-war cafe heritage like other European cities. But since opening in 1994, Osiris has been a meeting place for intellectuals and creatives of all types.

The decor is simple and the service demure, but the food is wonderful. Latvian artists hang on the walls and a handful of tables fill out the room.  The menu has pastas, salads, mains and other staples, but I got the special and I ain’t mad about it: Corn-fed* French chicken with cranberry chardonnay sauce, spicy red cabbage and sweet potato mash.

Miera is a street known in Riga for being a hipster area. And Rocket Bean Roastery is perhaps the most well-known of all those hipster establishments. Perhaps because it’s the “largest coffee roastery and shop in the Baltic states.” It could be their taste in music and decor. Or maybe because the coffee is excellent and very strong.

Seemed to be a good working environment, but they kicked me out at closing time before I really got into my groove. There’s a patio out back and other cool tea shops and bars nearby.

Also on Miera street, Taka is small, cozy and their craft beer game is on point. On my visit, they had about 6 beers on tap plus easily 50 bottled beers, all of them from Latvia. Just after opening on a Sunday evening, it was quiet. A few pairs of customers straggled in and out for a quick beer.

Taka felt like sitting in a friend’s living room while you wait for them to get ready, meanwhile entertaining yourself with a Scandinavian progressive political magazine, as one does. 😉

Don’t come to XL Pelmeni for the atmosphere (there is none) – but do come for delicious and cheap Russian dumplings. Pelmeni at this glorified snack bar are self-serve and sold by weight.

Fill your bowl with your favorite flavors (chicken, lamb, cheese, vegetarian and more) and don’t forget to grab some sauces and free toppings like sour cream, sweet chili sauce, parsley and horseradish. At around 2.40 euros per 200 grams, they are insanely cheap. A refreshing touch of simplicity in the otherwise touristy old town.

Not that you asked, but XL Pelmeni brought me back to my Workaway days, when I stayed with the Russian family in Montenegro.

For an easy day trip from Riga, hop on the train to Jūrmala. Lying to the west on the Gulf of Riga, you can reach Jūrmala in about 30 minutes by train (1.40euros, every 30 minutes).  At just over 56,000 inhabitants, this cute-as-a-button town is the 5th largest in Latvia. Here you’ll find beach access, wooden villas, Soviet-era relics, a large concert hall, local museum, and a pedestrian thoroughfare lined with restaurants

Jūrmala Beach itself is long and sandy, equipped with beach bars, bathrooms, a few run-down hotels, and aggressive seagulls to boot. I had an amazing time here and even stumbled onto the town’s annual street festival (early July).

Lido is kind of like the Luby’s of Latvia (where you serve yourself and then pay at the counter) – and the locals freaking love it. More than one person recommended it to me for “local” food. So there I was. And it was really good!

Have your fill of salmon & grilled meats, cold beet soup with dill, filled pancakes, and all the sauerkraut, potato salad and cabbage salad you could ever want. To go full-Latvian, try the gray peas. There’s beer on tap of course (it’s Latvia, after all) and they even have their own special brew.

Riga’s tall and proud Freedom Monument is a signal of Latvia’s independence and your signpost to the old town. The three stars held up by the woman represent Latvia’s three historical regions of Kurzeme, Vidzeme, and Latgale.

During the Soviet occupation, gathering at the Freedom Monument was enforceably forbidden. Now, the looming marble structure represents pride and freedom.

After a few years in Europe, I’ve seen a lot of churches! So it’s always nice to see something a little different. Nativity of Christ is a striking cathedral with sparkling golden domes and Orthodox-style architecture.

If you stay in the center of Riga (I loved my location on Terbatas iela), everything is within reach. Nativity of Christ is located in Esplanade plaza near a stone memorial to the Latvian poet Jānis Rainis. Also nearby are the Museum of the Occupation of Latvia and a major bus stop with easy options for crossing the river.

Museum of the Occupation of Latvia

This museum remembers “what happened to Latvia, the people of Latvia and the land during the reign of the communist Soviet Union and the National Socialist German regimes from 1940 to 1991”. Basically, it tells the story of how the USSR and Nazi Germany passed Latvia back and forth for a few years, and then the Russians occupied it until liberation in 1991.

One of the absolute coolest things I learned here was this: In August 1989, approximately two million people joined hands to form a human chain that connected the capitals (Vilnius, Riga, and Tallinn) of the three Baltic states. The Baltic Way (or Baltic Chain or Chain of Freedom) was almost 700 km long, a peaceful demonstration in protest to the Soviet occupation. Hell yes.

House of the Blackheads

To admire the opulence of days gone by, you can take a tour. Learn about the 17th-century merchant organization, the Brotherhood of the Blackheads. Or, stand outside and try to get a pic without people in it. 😉

The Daugava is a massive river. Massive, I tell you! Your first glance of it will likely be upon entering Riga center from the airport. Or, if you venture to Kalnciema kvartāls (Kalcienems quarter) for more wooden houses and another cool market!

The river is a perfect backdrop for a bike ride, afternoon walk or a nap in the grass. You can also hire a boat tour – not sure if it’s a granny party or a booze cruise or what, but I bet the views are lovely.

On the surface, Riga is a verrry chill town, but I have a suspicion there is some pretty great nightlife hiding under there. The Baltics are famously progressive when it comes to technology, entrepreneurship, and the environment – and remember that five-year-long party I mentioned?!? There are quite a few places in old town with live music, and I bet outside the tourist areas, there’s even more. If I ever make it back, I plan to find it.

As a freelancer, I rate it highly for the plentiful and fast internet, and a large variety of work-friendly coffee shops. The cost of living is average but you can definitely find your lane – there is as much luxury and global cuisine to be found as there are budget-friendly cafes.

So, go to Riga!! Explore! And let me know what you think!

2 thoughts on “Things to Do in Riga, Latvia”

This site uses Akismet to reduce spam. Learn how your comment data is processed.

Dolly says, Love is Love y’all. ❤️
Caught up with this adorable pregnant lady in Charleston!! #gradschoolfriends #catchups #ischool #reunitedanditfeelssogood #charlestonsc #stateside #roadtripp
One week Jubiläum 😍💍
And just like that, it’s almost May. #happybirthdaytome #earthday #quarantinebirthday #secondtimearound #operationstaythefuckhome
Humble enough to know I’m far from perfect. Confident enough to know I can do anything I set my mind to.
Weird hair hiking day. 🍁 🍃
Y’all know I love traveling, but I’m actually a major homebody too! I think it’s a Taurus thing ♉️ and I’ve basically adapted it to fit my traveling ways - I just turn wherever I am into a little temporary habitat, kinda like my favorite animal, the turtle!! 🐢🐢🐢
Vacation is over and it’s back to reality. 🙃 Let’s not call this goodbye, let’s call it ”until next time“...
Windblown hair, don’t care!💨So glad @danyhenrycarpintero let me talk him into driving to Slovenia for our ‘end of summer vacay’. The original plan BC (before COVID) was flying to Texas and Mexico to see friends and family, so it’s definitely bittersweet, but we’re making the best of it! Beautiful place...
Slovenia is dreamy and they have good radio stations. 🇸🇮 #operationgonetoslovenia #fallvacay #visitslovenia #sloveniatravel #lakebohinj
Just had a major wtf moment realizing that this was a YEAR ago. Feels like yesterday I was boppin’ around Mexico eating tacos and realizing that independence month is one of the best times to be here. 🇲🇽
Cutie little boulangerie in Aix en Provence. 🥖 💛 🥐
So, travelling is hecka nerve racking these days! But it felt SO good…
This mural is 🔥, super impressed by the Amsterdam Noord area (take a free ferry across the harbor)... A local told me the city is currently at 20% of normal tourism and that they are really missing the American and Chinese tourists. Being the smarta** that I am, I responded ”Never thought you would say that, did you?!“ 😂🤷‍♀️🦠 #coronavibes #lifeintimesofcorona #thisisholland #iamsterdam #ndsm #ndsmwerf #newnormal #summerineurope #operationgonetoholland
Look at lil sunburned baby me in Chile circa 2000/2001! Thank you @caldeosv for sending this!!! Is #flashbackfriday still a thing? #stilltraveling #operationgonedownmemorylane